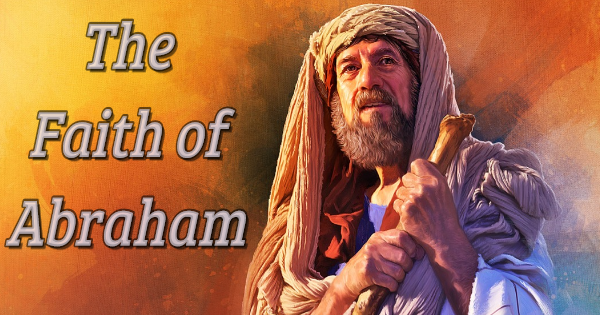 The Faith of Abraham

The Focus of Our Existence in Christ’s Footsteps

What is faith? The word faith is used 247 times in the Bible, and in all but 8 cases in the KJV the word comes from Strongs 4102, pistis, “conviction of the truth of anything; a belief or conviction respecting men’s relationship with God and divine things, generally including trust and holy fervor born of faith and joined with it.”
Faith means, “The substance [confidence] of things hoped for, the evidence of things not seen” (Hebrews 11:1). Galatians 5:22-23 tells us that faith is a fruit of the spirit. We are given this fruit at baptism.

The whole chapter of Hebrews 11 goes into this topic of faith, and examples of people who have excelled in this quality. I want to focus on just one of these personalities today … on Abraham. This man was accounted to be faithful, as we read in Galatians 3:9. “They that be of faith are blessed with faithful Abraham.” Abraham was faithful because he believed God (Genesis 15:6; Romans 4:3), and this belief was counted as righteousness.

We could discuss details of the life of Abram, whose name was changed to Abraham, but instead we will zero in on certain points of his life that apply to us all. I call them the three cardinal tests of Abraham’s faith.

1. When you leave your past life, never go back. The general principle is in Luke 9:62. Abraham was an example of this.
Genesis 12:1. Abram was told to get out of Ur of the Chaldees and away from his family — which were idol worshippers — and go to the land God would show him. He immediately left with his belongings and servants, and came to Haran, where he stayed until his father died (Genesis 11:32). After that he left Haran and journied to Canaan (Genesis 12:5); “… into the land Canaan they came.”
From that time, at about age 75, until his death 100 years later at age 175, he lived in many places, but he never returned to the place he left. WHY?

a. Ur was a land of idol worship, and for Abram to learn the new way of life he had to get out of his previous environment (see Joshua 24:2-3).

1) Remember that Rachel, who grew up with Terah’s idolatry, took along idols when Jacob left Laban (Genesis 31:32-35).
2) Archaeologists have unearthed a temple of the moon god in Ur from this time period. I think it is interesting that Islam, which originated in the Middle East, also worships the moon god, named Allah.
3) Ur was a wealthy place, and Abram had it good there. His father, according to tradition, was a high official in Nimrod’s government, so he went from two-story luxury homes to sleeping on the ground in a tent.
4) He could have returned to Ur, but he never did because he knew of the promises of an infinitely better country (see Hebrews 11:15-16).

b. He had to replace his old friends with new ones. Counselors will tell addicts that they need to leave former addict friends, and not be around places where drugs are used. If a man or woman gets involved with someone else, he or she has to utterly break the connection, even if it means quitting a job or moving away. One must make a complete break with the past to save one’s life or marriage.

c. To serve God he had to come clean and make a complete break with the world and his past. Sin-loving friends corrupt good morals (I Corinthians 15:33). Sinful habits must be broken, cold-turkey, and new habits installed (II Corinthians 6:17; 7:1). We press towards the mark of Christ’s high calling (Philippians 3:13-14).

a. Abraham’s promises were of:

1. A great name
2. A great many descendants
3. Blessings that would spread over all the world
4. Land

b. Abraham had none of these things when he left Ur, and it was not until 25 years after he did that they began to be fulfilled, in the birth of Isaac, for without an heir he had no way to fulfill them.

c. He had to have faith that God would give him a rightful heir (Isaac), and that when God ordered him to kill Isaac, God would raise him up again (Hebrews 11:17-19).

d. God told him that Sarah would have a child in her old age, and he believed Him. THAT TAKES FAITH! (Genesis 15:2–6).

e. Promises were made to him that his descendants would be strangers and servants in a strange land, but would be blessed, and leave it rich in 400 years (Genesis 15:13-14).

f. Also, in the fourth generation this exodus would happen (Genesis 15:16).

g. His descendants would exceed the number of stars, or grains of sand on the seashore, (Hebrews 11:12).

h. … but he never lived long enough to see these promises fulfilled … YET HE BELIEVED GOD WOULD PERFORM HIS PROMISES!
True to God’s promises, each of these has been fulfilled

1. Abraham’s name is respected by Christians, Muslems, Jews, and even unbelievers.
2. Israel became a great nation by the time David and Solomon came along, and we believe the Anglo-Saxon nations of today also are a part of that fulfillment; great Britain, the United States, and other Anglo-Saxon nations throughout history have been great nations on the earth.
3. Abraham’s descendants have been a blessing to all nations: the Bible, our basic morality, and the Savior Jesus Christ through Judah.
4. Israel was given the promise of land from the Nile to the Euphrates, and some of the best land in the world for Israel’s descendants today: the USA.

a. When told to sacrifice Isaac, he went ahead and was about to perform the task until God stopped him.
THE CIRCUMSTANCES TOLD HIM THIS CANNOT POSSIBLY WORK, BUT HE OBEYED ANYWAY!
ABRAHAM HAD TO PROVE THAT HE LOVED GOD FIRST, EVEN MORE THAN HIS DEARLY BELOVED SON.

c. We should obey God even when we don”t know why we should.

1. Abraham was a man of great faith — a type of Christ — and like him we should …

a. Leave our past behind.
b. Wait patiently for God’s promises to come true.
c. Obey God no matter what.

2. Are we willing to do these things?

a. To leave all of our past behind and walk in newness of life.?
b. Wait for God’s promise of eternal life, whether Christ returns soon or after we die?
c. Have faith that no matter what, we will obey and follow Him?

3. I think we all know the right choices here … and we all have the FAITH to do them.