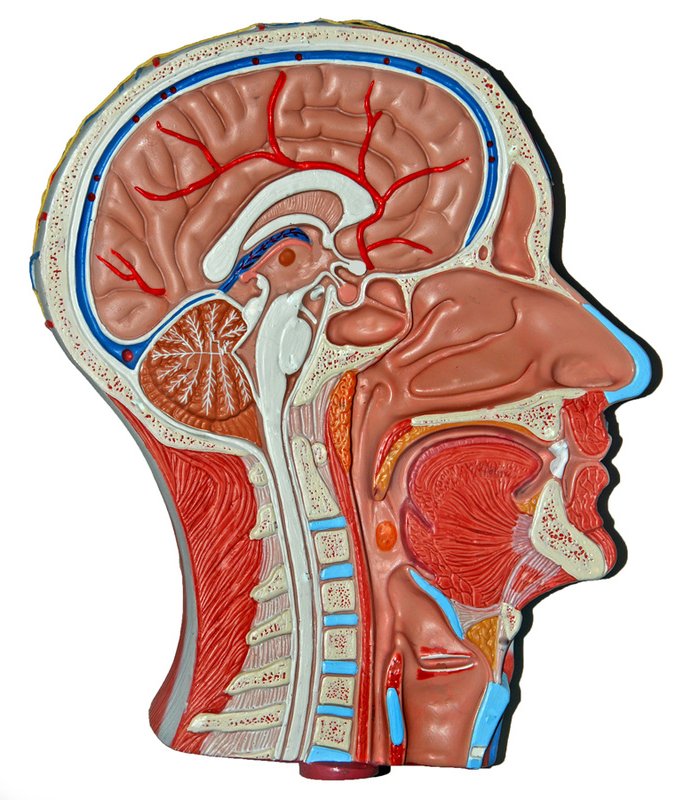 Head= kephale, “head, in a real, figurative, metaphoric, or symbolic sense.” The head contains the brain and “master gland” that control the entire body.

The hormones of the pituitary gland help regulate the functions of other endocrine glands. It has two parts—the anterior lobe and posterior lobe—that have two very separate functions. The hypothalamus sends signals to the pituitary to release or inhibit pituitary hormone production. The pituitary gland is often dubbed the “master gland” because its hormones control other parts of the endocrine system, namely the thyroid gland, adrenal glands, ovaries, and testes. However, the pituitary doesn’t entirely run the show.

Pineal gland. Located deep in the center of the brain, the pineal gland was once known as the “third eye,” the path to the soul. It produces melatonin, which helps maintain circadian rhythm and regulate reproductive hormones, but its total functions are unknown. It has a direct contact with the optic nerve and thus light through the eyes.

Hypothalamus. The portion of the brain that maintains the body’s internal balance (homeostasis), and is the link between the endocrine and nervous systems. The hypothalamus produces releasing and in- hibiting hormones, which stop and start the production of other hor– mones throughout the body. It regulates: l Heart rate and blood pressure l Body temperature l Fluid and electrolyte balance, including thirst l Appetite and body weight l Glandular secretions of the stomach and intestines l Production of substances that influence the pituitary gland to release hormones l Sleep cycles

Cerebral cortex. Consists of folded bulges called gyri that create deep furrows or fissures called sulci. The folds in the brain add to its surface area and therefore increase the amount of gray matter and the quantity of information that can be processed. The cerebrum is responsible for thinking, perceiving, producing and understanding language. Most information processing occurs here. The cerebral cortex is divided into four lobes which each have a specific function. These lobes include the frontal lobes, parietal lobes, temporal lobes, and occipital lobes. The cerebral cortex is involved in several functions of the body including: l Determining intelligence l Determining personality l Motor function l Planning and organization l Touch sensation l Processing sensory information l Language processing

Headship in the God Family

The head cannot function independently from the rest of the body and its supporting organs! l Each part of the body must support and maximize the function of the other parts (accommodation). l Headship is only an indication of responsibility within God’s created order. l Headship tells us a great deal about the mind of God, and what He has in store for us!