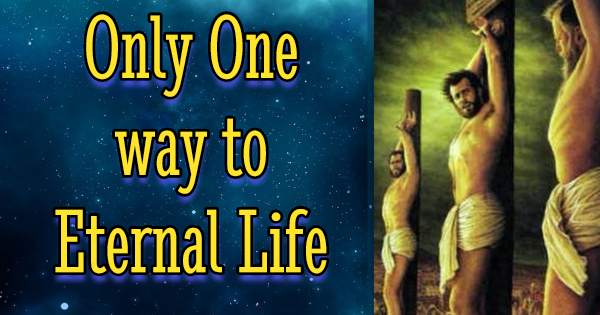 Only One Way to Eternal Life!

We live in an age where many people claim that there are several possible pathways to eternal life and that Jesus Christ is not the only door to salvation. This fact came to my attention recently during a trip to Vietnam, when on my return trip to the United States, while on a transfer bus at the Hong Kong airport, I overheard a flight attendant talking with a friend about what sights he ought to see while in Hong Kong. There was some discussion as to whether or not the “Giant Buddha” was worth seeing, and the attendant said that indeed it was, and that “When I go there I feel so clean, so free of my sins!” Was he not attributing the character of Jesus Christ to this image of a Kshatriya warrior from Nepal who lived in ancient India around 400 B.C.?

It was a shock to hear someone actually say — and obviously believe — that some pagan religion could actually lead to the forgiveness of sins and eternal life. The experience prompted me to look further into this issue, and what I found was absolutely shocking!

Polls conducted in 2007 and 2008 by the Pew Research Religion and Public Life Project revealed that most Americans who claim a religious affiliation take a non-exclusivist view of salvation, with 70% saying that many religions can lead to eternal life, while less than 25% say theirs is the one true faith leading to eternal life. Of this 70% that says many religions can lead to eternal life, it was found that they believe even non-Christine, including atheists, Moslem, and Buddhists, can attain eternal salvation. A full 80% cite at least one non-Christian religion that can lead to salvation, and 61% name two or more non-Christian religions.

Moreover, the poll found that about 30% of Americans believe that whether one achieves eternal life is determined by what a person believes, and 29% say that eternal life depends on one’s actions. Ten percent say that the key to attaining eternal life is a combination of actions and beliefs. There was no question that asked whether having God’s spirit was essential for eternal life, so that percentage of the total was not determined.

The results of the Pew study reveal, perhaps more than anything, the failure of most people who consider themselves to be Christians to study their Bibles. God’s word is Truth (John 17:17), and this word reveals the truth on this matter, as it does all other issues of life.

“Then Jesus said to them again, ‘Most assuredly I say to you, I am the door of the sheep. All who ever come before Me are thieves, and robbers, but the sheep did not hear them. I am the door. If anyone enters by Me, he will be saved, and will go in and out and find pasture. The thief does not come except to steal, and to kill, and to destroy. I am come that they may have life, and that they may have it more abundantly. I am the good Shepherd. The good shepherd gives His life for the sheep’” (John 10:7-11).

“For there is one God and one Mediator between God and men, the Man Christ Jesus, who gave Himself a ransom for all, to be testified in due time …” (I Timothy 2:5-6).

“For through Him we both have access by one spirit to the Father” (Ephesians 2:18).

These scriptures make plain that there is no other way to attaining eternal life except through Jesus Christ — plain and simple. The hope a true Christian has is in Him, but why is that so?

No Hope Without Forgiveness

The problem began with Adam and Eve, our first parents. When confronted by the temptation of Satan the devil (the serpent of Genesis 3:1) to partake of the tree of the knowledge of good and evil, first Eve and then Adam agreed to disobey God’s instruction. They committed sin by choosing for themselves what was right or wrong, rather than adhering to the laws their Creator placed before them to preserve and protect them … which guaranteed them eternal life if they would but follow them (Genesis 2:16-17). Adam and Eve sinned, and the result was death … a death that comes from sin, and which has passed down to every human being ever since (Ezekiel 18:4, 20; Romans 6:23; Psalm 51:5; Job 14:4; Romans 5:12, 17-19).

Sin brings death — eternal, final death — unless there is some means of forgiveness of that sin, some means to take sin away. We learn that blood is required to forgive sin.

“And according to the law almost all things are purified [cleansed] with blood, and without shedding of blood there is no remission [forgiveness]” (Hebrews 9:21).

Blood is the symbol of life, for “life is in the blood” (Leviticus 17:11-14); the blood nourishes and animates the body. In Old Testament times, the sacrifices of blemish-free cattle, sheep, goats, and doves were offered as a type of the ultimate sacrifice of Jesus Christ and His shed blood for the remission of sins. Paul made this clear in Hebrews.

“Not with the blood of goats and calves, but with His own blood He entered the Most Holy Place once for all, having obtained eternal redemption. For if the blood of bulls and goats, and the ashes of a heifer, sprinkling the unclean, sanctifies for the purifying of the flesh, how much more shall the blood of Christ, who through the eternal spirit offered Himself without spot to God, cleanse your conscience from dead works to serve the living God?” (Hebrews 9:12-14).

We must through our free will accept the sacrifice of our Savior and King, even as Christ freely sacrificed Himself for us.

Not just any sacrifice will do to remit the sins of mankind — remove them from us “as far as the east is from the west” (Psalm 103:11-12; see also Isaiah 38:17 and 43:25). Even the animals sacrificed during the Old Testament days were blemish-free, so the sacrifice for mankind’s sins had to be a flawless creature. That creature, that person, was Jesus Christ, who was born, of a woman and is a son of God as we are, and was tempted as were are, but did not sin.

“Seeing then that we have a great High Priest who has passed through the heavens, Jesus the Son of God, let us hold fast our confession. For we do not have a High Priest who cannot sympathize with our weaknesses, but was in all points tempted as we are, yet without sin” (Hebrews 4:15-16).

“For He made Him who knew no sin to be sin for us, that we might become the righteousness of God in Him” (2 Corinthians 5:21).

We became God’s very righteousness by being cleansed through His sacrificial blood. We have become like Christ Himself: sinless and clean (Romans 8:29)!

As we so well know, and as the Bible and history teach, Jesus Christ, our perfect sacrifice, was crucified on a tree and His blood was spilled to atone for the sins of all mankind, first for the firstfruits and then for all others whom He will call (I Corinthians 15:22-23; John 6:44). Without that spilled blood of a sinless sacrifice there can be no atonement for sin and release from the penalty of death. No other religion on earth has this perfect blood sacrifice for sin inherent in its tenets, not Buddhism, Confucianism, Hinduism, Islam, animism, or any other faith that captures the hearts of people. Only true Biblical Christianity, as revealed to those whom God has called, can promise the forgiveness of sins and the attainment of eternal life. Only Jesus Christ, the sinless sacrifice unique in all of earth’s history, offers the hope of salvation to mankind.

Let us emphasize again “The wages of sin is death”, but now add “but the gift of God is eternal life in Jesus Christ our Lord” (Romans 6:23). The whole matter is summarized by Paul in Romans in the previous chapter.

“Therefore, just as through one man sin entered the world, and death through sin, and thus death spread to all men, because all sinned — (For until the law sin was in the world, but sin is not imputed when there is no law. Nevertheless, death reigned from Adam to Moses, even over those who had not sinned according to the likeness of the transgression of Adam, who is a type of Him who was to come. But the free gift is not like the offense. For if by the one man’s offense many died, much more the grace of God and the gift by the grace of the one Man, Jesus Christ, abounded to many. And the gift is not like that which came through the one who sinned. For the judgment which came from one offense resulted in condemnation, but the free gift which came from many offenses resulted in justification. For if by the one man’s offense death reigned through the one, much more those who receive abundance of grace and of the gift of righteousness will reign in life through the One, Jesus Christ.) Therefore, as through one man’s offense judgment came to all men, resulting in condemnation, even so through one Man’s righteous act the free gift came to all men, resulting in justification of life. For as by one man’s disobedience many were made sinners, so also by one Man’s obedience, many will be made righteous. Moreover, the law entered that the offense might abound. But where sin abounded, grace abounded much more, so that as sin reigned in death, even so grace might reign through righteousness to eternal life through Jesus Christ our Lord” (Romans 5:12-21).

Let us not be a part of the majority of Americans who believe that there can be several pathways to eternal life. That belief is a lie perpetrated by Satan the devil, in his quest to mislead mankind into believing that mankind can choose for himself what is the truth … following the same error that Adam and Eve made in the Garden of Eden. Islam, Buddhism, Hinduism, and atheism do not have a Savior that pays the penalty for man’s sins. They are religions based upon reward according to works, the antithesis of God’s plan of salvation through repentance and faith — God’s granting of the spirit through baptism and the laying on of hands (Hebrews 6:1-2) of those whom the Father draws (John 6:44) — and receiving unmerited pardon as unworthy sinners.

As forgiven sinners, we are admonished to cease living in our old ways but practice lawful obedience to our Creator and Sustainer. As James stated, “Faith without works is dead” (James 2:17-18); we show our faith by our works, in order to please the One who made us, and promises blessings to those who keep His commandments (Leviticus 23; Deuteronomy 28).

What a wonderful God we have who has shown us a way out of the destructive web of sin and death into which we have been born, and has granted us the promise of eternal life in the millennial Kingdom of God, and in His world forever after. Let us resist the adversary who attempts to tell us otherwise, for there is only one pathway to eternal life, and that is through Jesus Christ!