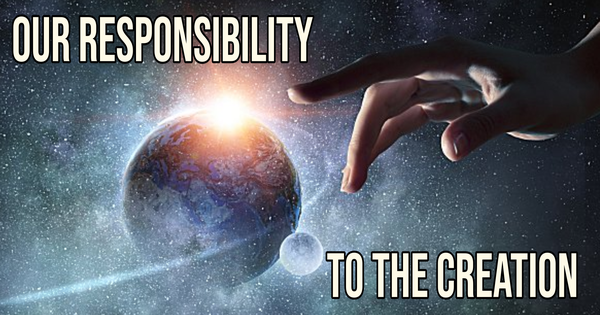 Our Responsibility to the Creation, and Not to Gaian Hypocrisy

I. God has given us two testimonies to Himself.

II. What do these testimonies reveal about God?

1. It reveals a history of the creation, of the people He made, and the plan for them on through the centuries.

2. Its teachings guide all of the people He created in how to live their lives.

3. It prophesies to reveal the future for past and future generations.

B. The Creation. This wonderful pattern gives the physical evidence of the nature of God, His designs to make it plain that He is the great, good, perfect, and benevolent Being that He is

1. He made the family pattern, male and female, reproduction after its kind, and mankind and all of the creation in His very own image and likeness (Genesis 1:26-27).

2. He made provision for the created environment to produce food, clothing, and shelter for the sustenance and increase of these created beings (Genesis 1:28-30).

3. He designed the creation (colors, smells and fragrances, textures, patterns, growth processes, etc.) to produce qualities of beauty, joy, and peace within the minds and hearts of people

III. How are we to treat the creation?

This dominion involves kindness to the created beings (Proverbs 12:10).

B. All of these creatures, and mankind,, are to be fruitful and multiply all across the earth (Genesis 1:22, 28). In order for these creatures and man to do so, mankind must nurture the environment so that they can multiply and fill the earth. This requires skillful service to the earth and its ecosystems so they can operate effectively, and produce the homes, food, and security they need to thrive.

C. Adam was placed in the Garden of Eden to dress and keep it (Genesis 2:15).

1. The implication of these commands is that people are to serve, protect, and keep safe the creation for its optimum productivity in order that the command to be fruitful and multiply can be fulfilled.

2. Thus mankind, in the image of God, is to treat the creation in a way that will ultimately bring it to a state of a literal Eden on earth! That is the purpose for man here on the earth (Matthew 6:10).

IV. How are we to not treat the creation?

A. We are not to beat down and pummel the creation for our own selfish gain; rather, we are to stewards of the creation, treating it with the character of God living through us, to do unto it as we would like to ourselves be treated (Matthew 7:12).

1. Tillage by disrupting and exposing the earth to rain and erosion. See Genesis 4:2. Cain was a tiller of the soil.

It can mean to “keep in bondage” or “compel”, such as by forcing the soil to produce for selfish gain.

3. Removing but not returning nutrients and organic matter to the soil

4. Eradicating populations and species of God-created plants and animals from various environments through over-hunting, building of cities, roads, and airports, and polluting of lakes, streams, and oceans

B. We are not to worship the creation

1. Exodus 20:3-6. “You shall have no other gods before me. You shall not make unto yourself any graven image, or any likeness of any thing that is in heaven above, or that is in the earth beneath, or that is in the water under the earth: you shall not bow down yourself to them, nor serve them, for I the Lord you God am a jealous God, visiting the iniquity of the fathers upon the children unto the third and fourth generation of them that hate me, and showing mercy unto thousands of them that love me and keep my commandments.”

2. Romans 1:18-25. “For the wrath of God is revealed from heaven against all ungodliness and unrighteousness of men, who hold the truth in unrighteousness; because that which may be known of God is manifest in them; for God has showed it unto them. For the invisible things of Him from the creation of the world are clearly seen, being understood by the things that are make, even His eternal power and Godhead; so that they are without excuse: because that, when they knew God, they glorified Him not as God, neither were thankful; but became vain in their imaginations, and their foolish heart was darkened. Professing themselves to be wise, they became fools, and changed the glory of the uncorruptible God into an image made like to corruptible man, and to birds, and fourfooted beasts, and creeping things. Wherefore God also gave them up to uncleanness through the lusts of their own hearts, to dishonour their own bodies between themselves: who changed the truth of God into a lie, and worshiped and served the creature more than the Creator, who is blessed for ever. Amen.”

Verse 25 (Young’s Literal Translation): “… who did change the truth of God into a falsehood, and did honor and serve the creature rather than the Creator, who is blessed to the ages. Amen.”

V. We live in a world in which Satan is encouraging mankind to worship the creation rather than the Creator. This teaching has permeated our government and educational systems worldwide, and must be resisted by all of us as we move towards the new eon just ahead.

As Sir James Lovelock said in Gaia: A New Look At Life, “all of the lifeforms on this planet are a part of Gaia – part of one spirit goddess that sustains life on earth. Since this transformation into a living system the interventions of Gaia have brought about the evolving diversity of living creatures on planet Earth.” Gaians teach that the “Earth Goddess”, or Mother Earth, must be protected from destructive human activity. It is this belief that fuels the environmental movement, sustainable development, and a global push for the return of industrialized nations to a more primitive way of life.

Gaians claim that “we are part of Nature and Nature is part of us, therefore God is part of us, and God is everywhere, and everything is God”. In reality, Gaia is actually a revival of the “Earth-goddess” found in many ancient pagan religions. The current Gaia Cult is a cunning mixture of science, paganism, eastern mysticism, wicca, and feminism. Many prominent environmental leaders, politicians, scientists, and religious leaders profess a literal belief in Gaia. Gaians appear to have infiltrated every level of power at the United Nations and risen to prominent positions in many Governments. This may be the most dangerous and devious cult on the face of the planet (from www.green-agenda.com).