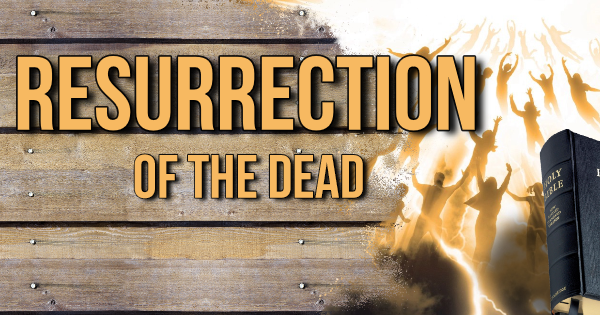 The Resurrections of the Dead

I. People are not immediately changed to living, active spirit at death, even if they have God’s Spirit.

A. True, the real essence of man — a spirit (see Philippians 1:23; etc.) — goes back to God at death (Ecclesiastes 12:7), but the state of that spirit is inactive until the resurrection.

2. The dead know nothing (Ecclesiastes 9:5); they will not be raised to consciousness until raised as spirits in the resurrection (I Thessalonians 4:14; etc.).

B. If everyone was raised to be with Christ and the Father at death, then there would be no need for a resurrection at a speciﬁc time on into the future … but the resurrections are indeed in the future (see Revelation 20:4-15), so the idea of being raised immediately upon death has no validity. It is true, however, that to the person who has died it will seem like no time has passed from death until the resurrection because he will be unconscious during this time.

1. Paul indicated there would be a speciﬁc time when the dead would be raised in the future, at the “last trumpet” (I Corinthians 15:50-53). Note that Paul says we will not all sleep (stay dead), but will be resurrected to a vital living state in the spiritual dimension; he did not say the saints would be raised one-by-one at the time of the death of each.

2. Paul also speaks of the resurrections as occurring at a speciﬁc time in I Thessalonians 4:15-17, at the voice of the archangel and the trumpet of God; then, resurrected people will rise en masse, not one-by-one at their deaths.

C. There are special cases where the dead have been resurrected, or “activated”, but that was only for a short time for speciﬁc purposes … except for Jesus Christ Himself, of course.

2. At Christ’s death, many of the saints arose and appeared to many in Jerusalem (Matthew 27:52-53), but we have no indication of exactly who they were — likely people that were known amongst the believers in Jerusalem — or how long they remained there. They likely returned to their graves later and continued their “sleep”, awaiting the resurrection.

3. At the Transﬁguration (Matthew 17:1-8) Moses and Elijah were “activated” for a time, but we have no record for how long. This again occurred as a unique, one-time experience in the presence of Christ and the apostles Peter, James, and John for a speciﬁc purpose.

D. Job knew that there would be a future time when people would be raised from their death “sleep” state (Job 14:14); he would “wait” in the grave until then.

F. In the Parable of the Ten Virgins (Matthew 25:1-13), the ﬁve wise virgins (the virgins meaning the blameless saints purchased by Christ’s blood: Revelation 19:8) are found sleeping at Christ’s return, but when Christ (the Bridegroom) returned they had enough oil (spirit) to enter into the marriage supper. Notice that all of the virgins, even the wise ones, had been sleeping and waiting until the Bridegroom (Christ) returned.

A. The ﬁrst resurrection, of the saints, those possessing God’s Spirit at His second coming:

1. Paul indicated that the saints would be changed to spirit and raised “in a moment, in the twinkling of an eye”, and the spirit body would be of a vastly different, incorruptible composition versus the physical body (I Corinthians 15:20-54).

2. Paul also indicated that those saints who had already died would be raised “at the last trumpet”, in the future, followed within perhaps moments or minutes by those saints who were living at the time of the return of Christ (I Thessalonians 4:15-17). As Zodhiates states in The Hebrew/Greek Key Study Bible, the word “caught up” in I Thessalonians 4:17 implies a speciﬁc moment, that believers will be caught up by Jesus as He descends from heaven, while the word “meet” means to come into the presence of or to meet. The “meeting” occurs after the dead have been raised, after which the bodies of those yet alive at the resurrection will be given new bodies.

3. Revelation 19:7-9 speaks of a “marriage supper” that transpired after the resurrection but before the actual institution of the Kingdom, when the resurrected, spirit saints sit on thrones to govern the earth in the love that present-day rulers — ruling in the character of Satan (II Corinthians 4:4; Ephesians 2:2; Luke 22:24-30) — cannot discover and exercise (Revelation 20:4; see also Revelation 5:10).

B. The second resurrection includes “the rest of the dead” (Revelation. 20:5), which are raised after the 1,000 years. This second resurrection most likely is further described in Revelation 20:11-15, the so-called “White Throne Judgement”, when all are judged, in particular, those who have never had a chance to hear Jesus Christ and the Father preached, i.e. never had the opportunity for salvation, and granted eternal life or death … not an “ever-burning hell ﬁre” like “Dante’s Inferno” as the Catholics believe.

1. A loving God would not consign incorrigibly evil unbelievers — those refusing to repent and accept Christ’s sacriﬁce — to torment forever, but will rather destroy him “forever”; their memory will be blotted out. This is the fate of Satan himself and his demons, to be “ashes upon the earth” (Ezekiel 28:18). It is not within the character of God to hold on to vengeful thoughts forever. He carries out justice and removes the evil, not allowing it to “hang on in torment”, as it were, forever.

2. These people are to be judged “according to their works” (Revelation 20:12-13), which is better translated “according as his work shall be,” as in the King James and other versions. They will be given positions of responsibility within the government of Elohim as the Eternal appoints to them (John 14:2), each of them assumedly being raised a king and a priest as were the saints in the ﬁrst resurrection who were raised over 1,000 years earlier (Revelation 5:10).

Those responsibilities in the government of Elohim will surely be based upon the gifts granted through His spirit (I Corinthians 12:18). It is likely that the reward of these raised people will not be quite the same as that given to those in the ﬁrst resurrection, for the ﬁrst resurrection is called “a better resurrection” (Hebrews 11:35), but we do not know the details on this matter.

III. The scenario of history is thus as follows on the next page: 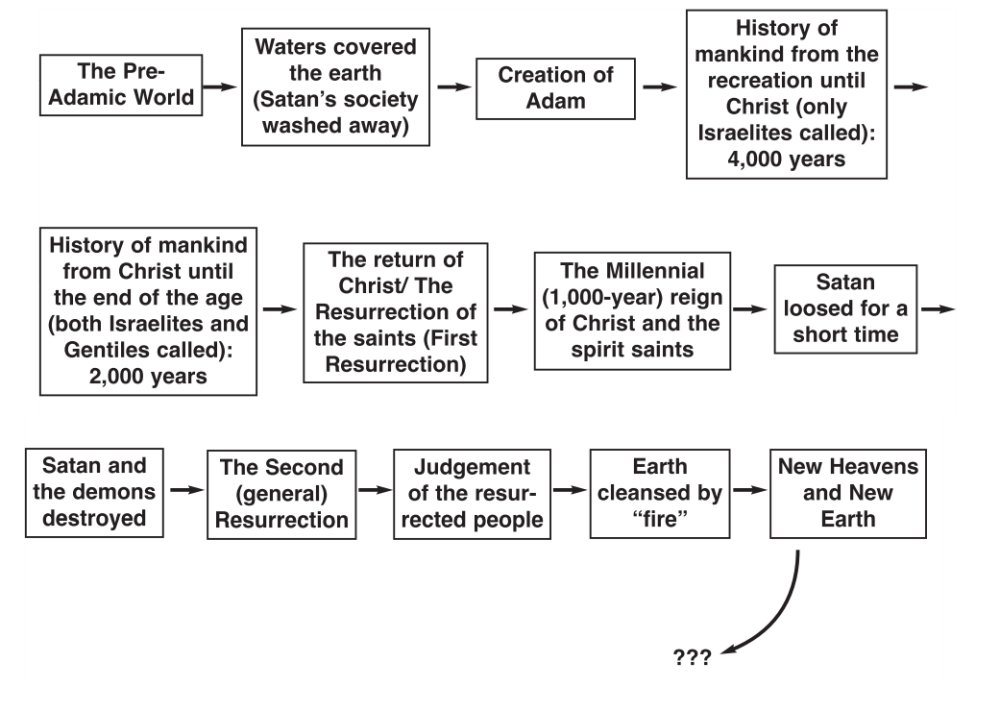