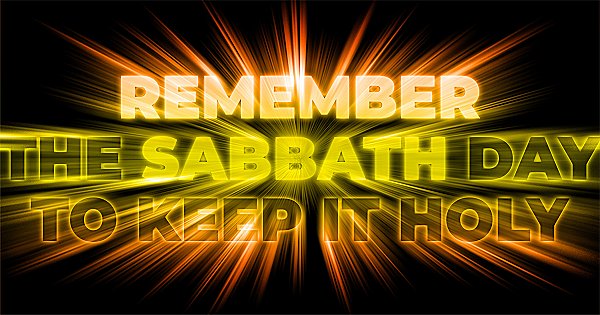 All true Christians know that the Sabbath is a day of rest commanded by the Eternal Living God. He makes the case clear in the Decalogue (Exodus 20:8-11; Deuteronomy 5:12-15), and in many other places in Scripture, that the day is special above all others, to be kept sacred as a sign of God’s people (Exodus 30:13; Ezekiel 20:12,20).

It is clear that the day is to be kept, according to the citations above and in particular to Isaiah 58:13, as a day of holiness, delight, and honor in which one is not to perform one’s own ways, do one’s own pleasure, conduct business, or speak one’s own words. In other words, it is a very special day, of the week to do the Eternal’s business by living in a mode that mimics the way life that will be in the coming age, the millennial Kingdom of God, the very time pictured by the Sabbath Day: 1,000 years of peace, productivity, beauty, and oneness with the Creator. Recall that the Sabbath Day concludes a seven-day week in which the first six days are wrought with mankind’s labor in a Satanically-oriented society. In like manner, the first 6,000 years of this re-creation have been wrought with mankind’s labor under Satan’s machinations … but he will be put away (Revelation 20:1-3) and Jesus Christ will assume kingship over all the earth in a seventh 1,000 years of perfect leadership, a utopia on earth (see II Peter 3:8 and Psalm 90:4).

It, therefore, behooves us to understand carefully what is proper conduct on this special day set apart for a holy convocation, without work being done (Leviticus 23:3). We can understand rather easily the need to avoid personal pleasures like fishing, playing cards and games, watching or participating in sports events, and performing our servile, money-making labors that remove our attention from God and place it on ourselves. Yet, we read that the Sabbath day allows pulling out an ox that has fallen into a pit (Luke 4:5), harvesting grain to eat from a field (Matt. 12:1; Mark 2:23; Luke 6:1), watering an ass (luke 13:15), preaching God’s word or performing “temple duties (Matthew 12:5), circumcising a male child (John 7:22-23; Leviticus 12:3), healing (John 7:23; 5:7-9; 9:1-14; etc.), and certain other things. In fact, Jesus Christ’s contentions with the Pharisees often centered around His disobeying the various laws that the Pharisees had constructed concerning acceptable conduct for the seventh day. They had built a rigid fabric of laws that constricted one’s proper conduct on the Sabbath — commandments of men!

“Howbeit in vain do they worship me, teaching for doctrines the commandments of men. For laying aside the commandment of God, you hold the tradition of men …” (Matthew 7:7-8).

We are given glimpses of the “law of liberty” under which we as Christians have regarding keeping the Sabbath holy, for when the spirit of the Living God is, there is liberty (2 Corinthians 3:17). The laws of God themselves are laws of liberty, apart from man’s laws (James 2:12). Liberty here, the Greek eleutheria, means freedom, in the righteous sense of license to act and think.

How far does this liberty we are promised, go? Let us look at a situation that defines the limits of Sabbath activity quite well.

“And that day [the day Christ was crucified] was the preparation [day for the weekly Sabbath], and the Sabbath drew on. And the women also, which came with Him from Galilee, followed after, and beheld the sepulchre and how His body was laid. And they returned, and prepared spices and ointments, and rested the Sabbath day according to the commandment” (Luke 23:54-56).

Here we find the Savior laid in the tomb of Joseph of Arimathea on Friday before sunset and the women who accompanied Him resting on the Sabbath that followed. They had prepared spices and ointments before sunset to treat His body (Luke 23:56) but did not go to the tomb to actually prepare the body that day. Surely such an “ox in a ditch”, the Savior of all mankind’s body in the tomb needing to be treated with spices and ointments, constituted an exception to the “rest” required for that day. Here was Jesus Himself, lying in the tomb, and yet the women with spices and ointments prepared did not venture to the tomb until the morning of the following day (Luke 24:1).

Far from displaying a blatant disregard for the Savior, whom they so deeply loved, they hearkened to the law of God which stated, “Remember the Sabbath Day, to keep it holy” (Exodus 20:8). The law took precedence over even treating Jesus Christ’s dead body, for He was now dead, and they knew that it takes three days for a body to begin decaying; thus, there was no “ox in a ditch” situation, for His body would still be there after the Sabbath, ready for treatment. They did not realize that His body would never see corruption (Hebrew shachath, “destruction, pit”, as in Psalm 16:10, and Greek diapthora, “decay”, as in Acts 2:27 and 31), or would be raised on the “third day” after His crucifixion, and would be removed from the tomb when they arrived.

This example of conduct for the Sabbath, exemplified by devout Israelites during the first century A.D., reveals the correct limits of proper Sabbath conduct. We must not follow the laws of modern Judaism, which is Pharisaism of today — laws of men — but follow the laws of almighty God who made the Sabbath for, man (Mark 2:27).

Be careful to keep the day special, in the ways that Jesus Christ did, by preaching and living His ways, healing, relieving the burdens and stresses from those around us, enjoying the beauty of the creation, fellowshipping and rejoicing with the spiritual brothers and sisters, and living now as if one is living within the Kingdom of God itself! What a glorious, refreshing, purposeful day this is. Let us not grow weary in keeping it a truly holy day.