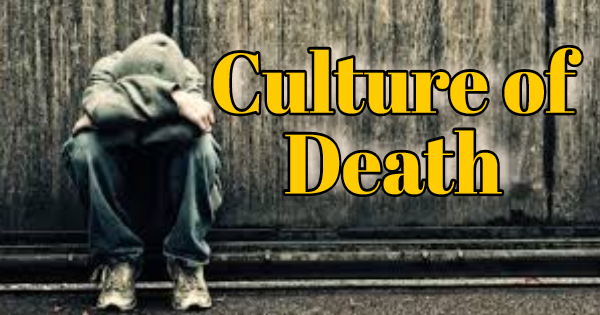 The Culture of Death in Which We Live

I. God’s way is life, but the Adversary’s way is death!

A. Jesus Christ is the door by which we may enter into, life and be saved; we “shall go in and out, and find pasture”. However, the thief [Satan] comes to steal, kill, and destroy. Jesus comes “… that they might have life, and that they may have it more abundantly” (John 10:9-10).

B. By obedience to God’s laws — avoiding idols, keeping the Sabbaths, reverencing God’s sanctuary, and walking in His statutes— He will bless His people with rain, increase on the land, peace and safety, large and happy families, and plenty of food (Lev. 26:1-13).

C. At creation, God made mankind to have excellent food, a beautiful and productive environment in which to live, harmony within families, no disease, and no death!

1. Male and female were made in Elohim’s image, with the command to multiply, have dominion over the creation, and eat of the fruits and herbs that God provided (Gen. 1:26-31).

2. Yahweh Elohim placed Adam in a beautiful environment in a garden designed for his optimum enjoyment and life (Gen. 2:7-8, 15).

D. Our Father’s plan is to purchase firstfruits in this life through His Son’s shed blood and grant them eternal life in His Kingdom.

1. We must endure persecutions in this life, but in the world to come eternal life is promised (Mark 10:30).

II. Satan’s way of life has, led us into a culture of death that commenced with the first family on earth.

D. The consequences of sin (lawbreaking) are outlined by God: sickness, pain, captivity by one’s enemies, loss of national power, drought, famine, pestilence, and ultimately destruction of the country and captivity of its inhabitants (Lev. 26:14-43).

E. Satan the devil is ultimately the cause of death and heartache on earth. Notice his various names and traits.

H. He causes diseases through direct intervention in our lives, or through our disobedience to God’s laws.

2. Israel in the wilderness was promised freedom from the diseases of the Egyptians if they kept God’s commandments (Ex. 15:26).

III. Truly, Satan has deceived and afflicted the entire world (Rev. 12:9). Satan has infected every aspect of this world with a “culture of death”. It seems as if every effort by this society’s structure is made to inflict injury, illness, suffering, and death.

A. War. Nations train armies and develop weapons of a chemical, nuclear, and biological nature that can now exterminate mankind from the earth. (See Matt. 24:21-22.) Many of these wars have been due to the lust for power by rulers, or to enforce religious beliefs on others.

B. Inquisitions. In the name of religion, the Roman Catholic Church killed at least 25 million Protestants over a period of about 600 years. In Darfur, Sudan, tens of thousands of “Christians are being killed by soldiers of a Moslem government.

1. Starvation by war, poor food distribution, or natural disasters such as drought, storms, and floods.

2. “Overfed by undernourished”, as in the United States where obesity, cancer, heart disease, diabetes, and other ailments are epidemic.

3. Farmers are forced to grow high yields of low-quality crops, and the food industry destroys much of its value and adds poisonous additions.

4. Water sources are seldom pure but contaminated by microbes, chlorine, fluoride, and other toxins.

5. Most jobs are sedentary, and prevent people from getting adequate sunlight, fresh air, and exercise.

D. Abortion. Many children are killed before they are born.

3. In 2002 Planned Parenthood performed 227,000 abortions, and is responsible for many more deaths since the organization distributed over 633,000 “morning after” pills … and the U.S. government helped in their cause by contributing $254.4 million of our tax dollars in 2002.

4. Abortion greatly increases the risk of breast cancer, especially for young women who abort after the eighth week of pregnancy (+800%).

5. Since abortion became “legal” in the U.S., the attitudes of Americans have quickly become more hostile to life. Fully 63% of Americans thought it was alright to remove Terri Schiavo’s feeding tube in Florida.

6. Abortion has replaced Baal worship as the preferred method of murdering young children (II Kings 16:3; 21:6). King Ahab and Queen Jezebel led the Israelites to worship Baal, and sacrifice their firstborn children in the fire.

1. The Terri Schaivo killing in Florida, sanctioned by the State, pushed forward the rights of physicians to terminate patients.

2. Euthanasia is now legal in some countries such as Holland.

3. Proponents of euthanasia, like Peter Singer of Princeton University, have a strong voice in the U.S. He even places the lives of animals on a par with people!

F. Health care. The entire medical system of drugs, surgery, and radiation treatments deal with effects, not causes, so people are not encouraged to be healed. Money and profits take precedence over truly healing the person.

G. Entertainment and music. The more morbid the film or the music the more plaudits the producers get from reviewers and the media.

1. Rock and metal music actually will kill plants if the exposure is prolonged.

2. Hollywood churns out filth, especially lewdness, pornography, and anti-Christian, banal films despite the fact that they make less money than wholesome films.

3. The Internet is rife with sexually explicit websites.

H. Drug usage. Both legal or illegal drug usage, across the nation and world, lead to great suffering and premature death.

I. Family life. Husbands and wives are encouraged by many in government and education to, divorce, leaving children to absorb the abuses of such breakups. Always the bastion of society’s stability, families are under attack as never before, and “alternative lifestyles” like homosexual “families” or polygamous associations are portrayed as acceptable. Oftentimes both parents must work to survive economically, pulling the wife out of the home and away from domestic activities and children.

J. Education. More and more the laws of God are excluded from public life, and with them, the blessings of God are removed as well (Lev. 16; Deut. 28).

1. The Ten Commandments and Jesus Christ are being removed from schools and public buildings, while Islam, a “religion of death”, enjoys greater exposure.

3. Toys emphasize brutality and demonism, as do video games.

K. Business. The “profit motive” dictates that profit maximization overrides a conscience toward individuals. Corporations run roughshod over the love for one’s brother.

1. Monsanto, in concert with our own U.S. Department of Agriculture, develops and distributes genetically modified crops despite their harmful effects on people.

2. Oil companies drill and destroy the beauty and productivity of land, the landowner having little or no say in the matter.

L. Property rights. Now land can be taken from private individuals for private use. Things are becoming very much like in Ahab and Jezebel’s time (I Kings 21:1-16).

M. Transportation. Automobiles killed 42,643 people in the U.S. in 2005, and while allowing people past passage, they as well as airplanes encourage us to live beyond the moderate pace of life that God designed for us.

IV. Despite the culture of death all around us, God assures us that, once this evil culture has run its course, the author of it all will be bound and the true Son of Life will take control.

B. All of the suffering we must experience in this life will not be worthy to be compared with the glory and exhilaration we will experience in the coming age (Rom. 8:18-23).