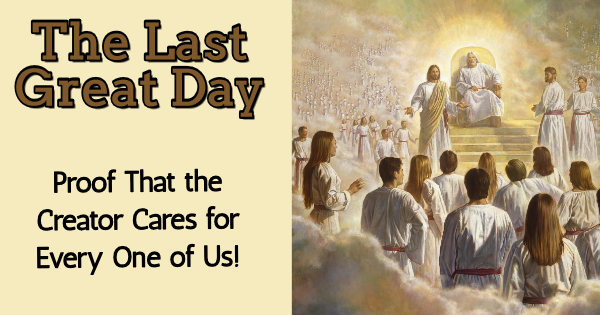 The Last Great Day
Proof That the Creator Cares for Every One of Us!

I. Here we are at the conclusion of the Feast of Tabernacles, on this day called the Last Great Day. It is the last of the seven-Feast succession throughout the year that began shortly after the beginning of the sacred year:

Nisan 14. Passover => Christ crucified to abolish the sins of those whom He calls

Nisan 15 to 21. Days of Unleavened Bread (Feast of Firstfruits) => Harvest of the firstfruits (barley) — Israel

Tishri 1. Feast of Trumpets => Return of Jesus Christ and the resurrection of the firstfruits

Tishri 10. Day of Atonement => The saints enter the presence of the heavenly temple for the marriage supper

Tishri 15 to 21. Feast of Tabernacles => Millennial reign of Jesus Christ and the saints

Tishri 22. Last Great Day => Second Resurrection and the next phase of God’s plan

II. The Last Great Day is not spoken of a lot in Scripture, but we read about it in the following places:

B. Nehemiah 8:18. “Also day by day, from the first day until the last day, he read from the Book of the Law of God. And they kept the feast seven days; and on the eighth day there was a sacred assembly, according to the prescribed manner.”

C. Numbers 29:35. “On the eighth day, you shall have a sacred assembly. You shall do no customary work.”

D. II Chronicles 7:8-10, “At that time Solomon kept the feast seven days, and all Israel with him, a very great assembly from the entrance of Hamath to the Brook of Egypt. And on the eighth day, they held a sacred assembly, for they observed the dedication of the altar seven days, and the feast seven days. On the twenty-third day of the seventh month, he sent the people away to their tents, joyful and glad of heart for the good that the LORD had done for David, for Solomon, and for His people Israel.

E. John 7:37-39. “On the last day, that great day of the feast, Jesus stood and cried out saying, ‘If anyone thirsts, let him come to Me and drink. He who believes in Me, as the Scripture has said, out of his heart will flow rivers of living water.’ But this He spoke concerning the Spirit, whom those believing in Him would receive; for the Holy Spirit was not yet given because Jesus was not yet glorified.”

III. The day is the “eighth” day of a series, which in Hebrew typifies “fatness, abundance, and fertility.”

A. On this eighth day there was more sacrifices than on any other holy day.

B. The day had a special significance because it is explained by Jesus as follows:

“He that believes in Me, as the Scripture has said, out of his body shall flow rivers of living water. (But this He spoke of the spirit, which they that believe on Him should receive.)” (John 7:37-38).

C. Thus, the Last Great Day refers to the activity of the spirit of God flowing into and out of God’s elect. We have that very character today.

IV. We can look in the order of Scriptural prophetic events and discover where in the future the Last Great Day resides.

A. Day of Atonement and Feast of Tabernacles: Revelation 19 and 20 speak of the marriage supper at God’s throne, the return of the saints and angels with Christ to defeat the Beast and the False Prophet, the putting away of Satan, and then the millennial reign of Jesus Christ.

B. Revelation 20:7-10 speaks of the release of Satan, and his attempt to defeat the saints, and then his destruction in the lake of fire.

Revelation 20:11-15.”Then I saw a great white throne and Him who sat on it, from whose face the earth and the heaven fled away. And there was found no place for them. And I saw the dead, small and great, standing before God, and books were opened And another book was opened, which is the Book of Life. And the dead were judged according to their works, by the things which were written in the books. The sea gave up the dead who were in it, and Death and Hades delivered up the dead who were in them. And they were judged, each one according to his works. Then Death and Hades were cast into the lake of fire. This is the second death. And anyone not found written in the Book of Life was cast into the lake of fire.’

D. What we see here is the “Great White Thone Judgment”, a time when every person that has lived over the millenia who had not previously been called is raised up, and given the opportunity for eternal life.

1. Of course, they will have to accept Jesus’ sacrifice, just as we have.

2. What a magnificent God we have that desires that none be lost!

E. There will apparently be some few who will not repent and accept Jesus’ sacrifice; otherwise there would be no sense to verse 15, to be thrown into the lake of fire.

V. I want to zero in a bit on these last words of Revelation 20.

A. We see the dead raised up in this second resurrection, both small and great: the jungle pygmies to the 30-foot giants found in skeletons preserved in geologic strata.

B. Verse 12: the books (biblion = roll or book”) were opened. I believe these are the recorded lives of these people that are standing before the throne, as we see in Psalm 139:18. “Your eyes saw my substance, being yet unformed, and in your book (seper = tablet, scroll, certificate”) they all were written, the days fashioned for me, when as yet there were none of them.” In v. 13 we see that the sea gives up its dead, including those who have died at sea, or were drownd in the Great Flood of Noah’s day, or in the flood that we see before the creation in Genesis 1:2 This will include, I believe those children who have been aborted, stillborn, or killed in wars, famines, and disease epidemics. What a crowd of billions this will be!

C. Then, in verse 13, an interesting thing is said: “Then another book was opened, which is the book of life. And the dead were judged by what was written in the books, according to what they had done.”

judged = krino, “to separate, to make a distinction between, to exercise judgment upon.”

D. Oh, so now we have a different method of judgment as to who is worthy to be given eternal life. Now we have a gospel of good works to make it into the Kingdom of God, not God’s calling, choosing, repentance, baptism, and the laying on of hands like we see throughout the New Testament. Do these people get to skip that process and sail on into eternal life without Christ’s blood shed for them?

E. Notice Revelation 22:12. “And behold, I come quickly, and my reward is with me, to give every man according as his work shall be.” (KJV)

— Other translations give this same sense of “according as his work shall be.”

F. Is this not saying that God will give each resurrected being a particular job or responsibility in the coming government of God. Is it possible that the translations of Revelation 21:12 and 13 give the sense of salvation by works that John never intended?

G. These things we know?

That place for us will be the heavenly city (Revelation 21:9-11). We will be given a place and responsibility as a King and a Priest in that heavenly temple.

2. You cannot gain eternal life by doing good works! Eternal life is a gift! Some people say that eternal life is the gift, and your position is the heavenly realm is according to your works while here on earth. Yet, that flies in the face of God’s words: “The last shall be first”, and “The servant is the greatest”, etc.

Ephesians 2:8-10 “For by grace you have been saved through faith, and that not of yourselves; it is the gift of God, not of works, lest anyone should boast. For we are His workmanship, created in Christ Jesus for good works, which God prepared beforehand that we should walk in them.” We are God’s workmanship, “created in Jesus Christ for good works.”

3. We see that works go along with faith; you prove your faith by works.

I. Abraham was justified by faith, not by works (Romans 4:1-6), but salvation was granted as a gift to him just like for all of us.

J. God has placed each one of us in the body just as He has desired (I Corinthians 12:18), and that is not our decision, nor is there any indication that we can change His decision. He knows what is best for us, since He knows us better than we know ourselves.

K. Thus, we can say that good works are a consequence of faith, and of God’s spirit within us, but works are not the way to salvation. We do good works to please the One who has called us out of a world of sin!

L. God is not going to thrust these people He raised up in the White Throne Judgment into eternal life without having to repent and accept Jesus Christ as their Lord and Savior. There will likely be a time period here during which they will do that (Isaiah 65:20-22), but we have few details.

VI. The Last Great Day indeed pictures a time of the spirit of God being poured out upon the great masses of people who have never been called before — the second Resurrection. What a tremendous time that will be!