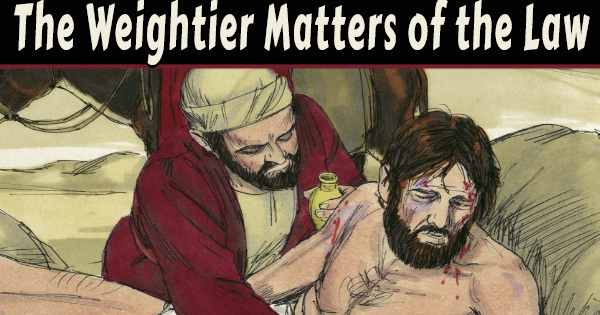 What Did Jesus Mean, “The Weightier Matters of the Law?

I. It is nearly Passover time, and the Scriptures admonish us to be unleavened, to cast off the leaven of malice and wickedness and put on the unleavened bread of sincerity and truth (I Cor. 5:6-8).

III. When we examine ourselves, what standard are we using? Obviously we look to Jesus Christ as the standard, for He is the One in whose steps we walk (I John 2:6).

C. We are to love God, which also involves keeping the commandments (I John 5:3).

IV. It is thus clearly seen that the commandments — or law — are necessary to be kept to be brothers of Christ, but is simply a rote doing what the law says the fulfillment of what the law requires?

A. Jesus Christ told the rich young ruler to keep the commandments, but then told him to do something more … to truly fulfill the intent of the commandments: forsake what physical attachments he had with the world and follow Him (Matt. 19:16-22).

B. Jesus also said that the commandments typify love to God and love to one;s neighbor, and on these two precepts hang all of the law and the prophets (Matt. 22:36-40).

V. Immediately after Jesus answered the lawyer his question about the “great commandment in the law” in Matthew 23, He launched into a scathing attack upon the scribes and Pharisees, condemning them of many errors regarding the keeping of the law.

A. Matt. 23:23. “Woe unto you, scribes and Pharisees, hypocrites! You pay tithe of mint and anise and cummin and have omitted the weightier matters of the law, judgement [Strong 2920], mercy [Strong 1656], and faith [Strong 4120]: these you ought to have done and not to leave the other undone”.

B. Thus, properly keeping the law involves not only doing the requirements of the law which benefit both God and man, but having an attitude of mind which fulfills the entire purpose behind the law and the prophets: “Do unto others as you would have others do unto you” (Matt. 7:12). This requires the exercising of both one’s rational thought and emotional response, the “mind” and the “heart”. [Are these really analogous to “soul” and “spirit”?] The brain, the center of rational thought processes, processes one’s sensory input and makes rational decisions, but the heart is the center of feeling.

VI. Let us look at judgement, mercy, and faith, and how they relate to our keeping of the law.

1. Old Testament usage. Usually 4941, mishpat, from 8199, “a verdict (favorable or unfavorable) pronounced judicially, especially a sentence or formal decree”. It has two main senses, (1) the act of sitting as a judge, hearing a case, and rendering a proper verdict (as in Eccl. 12:14), or (2) the “right” belonging to someone (as in Ex. 23:6), with several nuances in other cases.

2. New Testament usage. Usually 2920, krisis, “decision for or against, by extension a tribunal, by implication justice”. As a noun, krisis denotes (1) the process of investigating, the act of distinguishing and separating, and hence the passing of judgement upon a person or thing; (2) a variety of other meanings such as judicial authority, justice, tribunal, trial, standard of judgement, and divine judgement; (3) condemnation.

3. The process of judgement takes considerable thought and consideration, taking into account all of the facts surrounding an issue to get at the truth.

b. Love must be involved throughout judgement, “… is very patient, very kind, knows no jealousy, makes no parade, gives itself no airs, is never rude, never selfish, never irritated, never resentful, never glad when others go wrong, is gladdened by goodness, always slow to expose, always eager to believe the best, always hopeful, always patent” (I Cor. 13:4-7, Moffatt Translation).

c. We must judge others as we would want to be judged ourselves: “For with what judgement you judge you shall be judged, and with what measure you mete, it shall be measured to you again “ (Matt. 7:2). Then Jesus goes on to say how we ought not consider the mote in our brother’s eye while failing to recognize the beam in our own eye. Thus, we must consider others better than ourselves while judging (Philip. 2:3).

d. Jesus relied on the Father’ discernment in judgement, saying that His own judgement was just only as a consequence of His seeking the Father’s will (John 6:30).

e. God’s judgement is perfectly right, as He will destroy the Babylonian system because of the great evil she has done in executing unrighteous judgement (Rev. 17:1-6, 18).

f. As spirits we, the saints, will be given perfect judgement in the millennium (Rev. 20:4).

1. Old Testament usage. 2617, checed, from 2616, “kindness, by implication piety (toward God)”. The word, one of the most important in Old Testament vocabulary, means loving-kindness, steadfast love, grace, mercy, faithfulness, goodness, and devotion. In general, three basic meanings of the word interact: strength, steadfastness, and love. The word also refers primarily to mutual and reciprocal rights and obligations between the parties of a relationship (especially Yahweh and Israel). Checed involves personal commitment in a relationship beyond the rule of law, and is often related to marital love: thus, devotion oftentimes captures the meaning of checed. The Bible prominently uses the term checed to characterize a life of sanctification within the covenant.

Other Hebrew words are used for mercy: 3727, kapporeth, from 3722, “mercy seat that sits atop the ark”; 7355, racham, “to fondle, by implication to love or be compassionate”. A few other words are also used.

2. New Testament usage. 1653, eleeo, from 1656, “to be compassionate (by word or deed)”. In general this verb means to feel sympathy with the misery of another, especially sympathy manifested in act. 1656, eleos, “compassion, human or divine”. Eleos is the free gift for the forgiveness of sins and is related to the misery that sin brings. God wishes to lessen and entirely remove our misery, efforts that are hindered and defeated usually by man’s continued perverseness. Grace removes guilt, mercy removes misery. When eleos is combined with “peace”, usually eleos precedes peace since mercy is the act of God and peace is the resulting experience in man’s heart. A few other Greek words for mercy are also used.

3. This sympathy and forgiveness is extended to whomever the Father wills, even as Jesus associated with publicans and sinners and said, “I will have mercy and not sacrifice” (Matt. 9:11-13). He came to call sinners to repentance, not the righteous.

4. No one really deserves this mercy from our verdict of sure death, but when the Father calls (John 6:44) then that sinful verdict is eliminated (Rom. 6:23). Salvation is truly a gift for the undeserving (Rom. 5:14-17).

5. This mercy from God is extended only to those whom the Father has predestined to be in His Kingdom, for some vessels are fitted for destruction (Rom. 9:15-23).

6. An entire Psalm is dedicated to the unending mercy of God (Psalm 136), just as nearly all of Psalm 119 is dedicated to extolling God’s law. Mercy and law are unified partners.

1. Old Testament usage. Only two Hebrew words are used, both related closely: 529 (Deut. 32:20), emuwn, from 539, “established, i.e., trusty”; 520 (Hab. 2:4), feminine of 529, “firmness, security, fidelity”. This word is translated in other places as “office, faithfulness, truth, steady”, and related words. It means “firmness, faithfulness, truth, honesty, lasting, continuing, and certain”. The word is generally used to describe someone in a fixed position (as in Ex. 17:12), showing how faith never is diverted from its object.

2. New Testament usage. In all but six instances of its 245 occurrences in the King James Version, faith is translated from 4102, pistis, from 3982, “persuasion, i.e. credence, moral conviction, especially reliance upon Christ for salvation, and constancy in such a profession”. Pistis in general means the conviction of truth in any thing or belief, and a conviction respecting man’s relationship to God and divine things, with the idea of holy fervor and trust born out of faith.

6. With this absolute belief that God will carry out one’s requests, nothing is impossible, even the moving of mountains (Matt. 17:20).