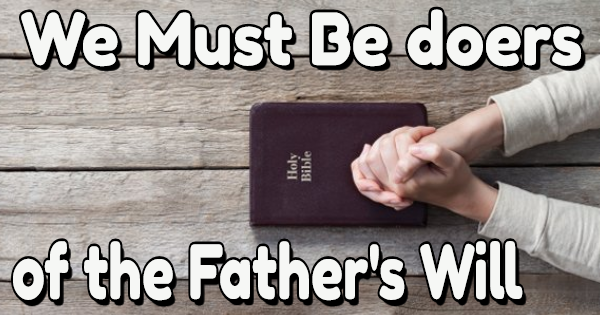 We Must Be Doers of Our Father’s Will

To Be a Doer We Must Follow the Great Leader of All the Universe!

We know from Scripture that we are to be doers of God’s will — not hearers only — which is to follow in the footsteps of Jesus Christ, who is the very image of our heavenly Father. If you have seen Christ you have seen the Father and will do the Father’s will.

James 1:22 – 25. “But be doers of the word, and not hearers only, deceiving yourselves, for if anyone is a hearer of the word and not a doer, he is like a man observing his natural face in a mirror; for he observes himself, goes away, and immediately forgets what kind of man he was. But he who looks into the perfect law of liberty and continues in it, and is not a forgetful hearer but a doer of the work, this one will be blessed in what he does.”

We know that by being doers of God’s laws we are following in the footsteps of Jesus Christ, who kept the law perfectly, never sinned, and thus became the perfect sacrifice for all sins committed by mankind.

I John 2:5. “But whoever keeps His word, truly the love of God is perfected in him. By this, we know that we are in HIm.”

I Peter 2:21-23. “For to this you were called, because Christ also suffered for us, leaving us an example, that you should follow His steps; Who committed no sin, nor was deceit found in His mouth, who, when He was reviled did not revile in return; when He suffered, He did not threaten, but committed Himself to Him who judges righteously;” who Himself bore our sins in His own body on the tree, that we having died to sins, might live for righteousness — by whose stripes you were healed. For you were like sheep going astray, but have now returned to the Shepherd and Overseer of your souls.”

Hebrews 4:15. “For we do not have a High Priest who cannot sympathize with our weaknesses, but was in all points tempted as we are, yet without sin.”

Our heavenly Father and Jesus Christ are our Great Leaders, for we are their creations. We know they are perfect and sinless, so even though we sin we desire not to sin, but to be perfect like they are.

Genesis 1:27. “So God created man in His own image; in the image of God He created him; male and female He created them.”

Matthew 5:48. “Therefore you shall be perfect, just as your Father in heaven is perfect.”

We Know We Have a Great Leader!

In a very real sense we are like the mighty men of David’s army, who did great exploits far beyond what a normal person could do, not just because God was fighting for them but because in David, their human leader, they saw qualities they could respect. Perhaps all of these mighty fighters knew David had been anointed by God through Samuel to be the king of Israel (I Samuel 16:13), so they sensed the calling that God had placed on David’s life. They placed themselves under his command not just because he was talented, good-looking, and strong, but because he was anointed to be king.

A great leader must have a calling upon his life. Notice how Jesus responded to the Roman centurion who asked Him to heal his servant.

Matthew 8:5-10. “Now when Jesus had entered Capernaum, a centurion came to Him pleading with Him, saying, ‘Lord, my servant is lying at home paralyzed, dreadfully tormented.’ And Jesus said to him, ‘I will come and heal him.’ The centurion answered and said, ‘Lord, I am not worthy that You should come under my roof. But only speak a word, and my servant will be healed. For, I also am a man under authority, having soldiers under me. And I say to this one, Go, and he goes; and to another, Come, and he comes; and to my servant, Do this, and he does it..’ When Jesus heard it, He marveled, and said to those who followed, ‘Assuredly, I say to you, I have not found such great faith, not even in Israel!’”

In more recent history, King Henry III of Bavaria learned authority in a rather different way. In the eleventh century, King Henry III grew tired of court life and the pressures of being a monarch. He made application to Prior Richard at a local monastery, asking to be accepted as a “contemplative” and spend the rest of his life in the monastery. “Your Majesty,” said Prior Richard, “do you understand that the pledge here is one of obedience? That will be hard because you have been a king.”

“I understand,” said Henry. “The rest of my life I will be obedient to you, as Christ leads you.”

“Then I will tell you what to do,” said Prior Richard. “Go back to your throne and serve faithfully in the place where God has put you.”

When King Henry died, a statement was written: “The King learned to rule by being obedient.”

Whether we are a father, mother, teacher, businessman, waitress, or mechanic God expects us to be faithful to our vocation wherever He has planted us, even when we tire of our role. We must be great leaders in whatever niche of life we find ourselves, for the Eternal is the one responsible for us being there.

We Know We Have a Great Cause

David’s mighty men followed him not just because he was the specially anointed king of Israel, but also because David presented them with a great cause. They followed him not because he just gave orders, but because he had the character that made people want to do what he told them. Notice that David was able to convince even Saul, his future arch-enemy, to give him the chance to slay Goliath (I Samuel 17:32-38). David’s troops so greatly believed in him and his course that three of his mighty men broke through the Philistine’s lines to fetch water from the well of Bethlehem (II Samuel 23:15-16).

When presented a great cause, these mighty men expressed great courage because they themselves sensed this courage in their leader. This strong character matched their own. For us the very mind of our heavenly Father and Christ has been placed within us by His spirit, so we sense the unlimited courage of our Great Leader.

Hebrews 8:10. “For this is the covenant that I will make with the house of Israel after those days, says the Lord; I will put My laws in their mind and write them on their hearts, and I will be their God, and they shall be My people.”

I Corinthians 2:16. “For who has known the mind of the Lord that he may instruct Him? But we have the mind of Christ.”

These mighty soldiers of David had the courage to stand their ground and lay down their lives for what their leader believed in. They were passionate about the same things David was passionate about. As one philosopher correctly stated, “Character may be manifested in great moments, but it is made in the small ones” (Phillips Brooks). David did not let hypocrisy creep into his conduct and attitudes: he believed in his mission and he stayed the course.

Besides these things, David usually expressed great restraint and self-control of his physical desires. All of these qualities he held up in plain view for his troops to see, and because they saw his calling and great cause they wanted it to match their own. Such is the case with all highly effective leaders, and Jesus Christ was the greatest of all, being a Great Leader because He was a Great Follower.

The Nature of Our Great Leader

Let us take a brief but close look at this Great Leader that we follow, for as He follows the Father, so we must follow Him to become the great leaders we all desire to be. First, what do Christ and the Father look like? They look like us, more-or-less, at least in our major physical traits, since we are made in Elohim’s image.

Genesis 1:27. “So God created man in His own image; in the image of God He created him; male and female He created them.”

John 14:9. “Jesus said to him, ‘Have I been with you so long, and yet you have not known Me, Philip? He who has seen Me has seen the Father; so how can you say, Show us the Father’?”

Daniel 7:9. “I watched till thrones were put in place, and the Ancient of Days was seated; His garment was white as snow, and the hair of His head was like pure wool. His throne was a fiery flame, its wheels a burning fire; ….”

Revelation 1:13-15. “… and in the midst of the seven lampstands One like the Son of Man, clothed with a garment down to the feet and girded about the chest with a golden band. His head and hair were white like wool, as white as snow, and His eyes like a flame of fire; his feet were like fine brass, as if refined in a furnace, and His voice as the sound of many waters; ….”

What is the character of this great divine Being?

They fulfill the weighter matters of the Law. Matthew 23:23.

There are so many that the world could not contain the books written about them. John 21:25.

Jesus Christ was, and is, the living, breathing, walking, speaking reality of the Word! He is the Great Leader we have all been looking for, whom our heavenly Father called us to meet face-to-face, so we might meet Christ and emulate Him (John 6:44). He is our Head (I Corinthians 11:3) and our Elder Brother, the firstborn among many brethren (Romans 8:29). We are great followers of Him because He is a Great Follower of the Father! We can place our total confidence in Him because He made us, cleansed us from our sins, and gave us new hope, new life, and a vision of the new world that is to come, that renewed Eden on the earth. We love Him because He first loved us (I John 4:19), and we every ounce of our energy to follow Him to the ends of the earth … and beyond!