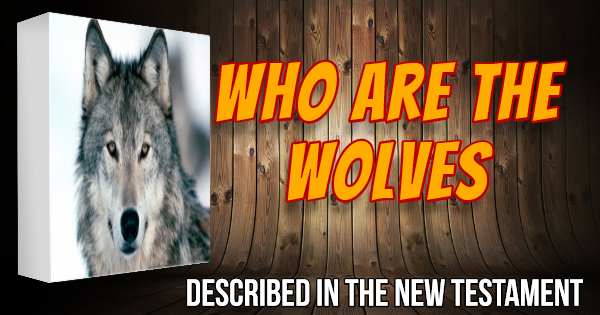 Who Are the “Wolves” Described in the New Testament?

We all know what wolves are, members of the dog family that are notorious for attacking and eating prey through relentless pursuit, be they deer, moose, bison, or caribou. They also catch smaller prey like hares and mice. They are noted for being vicious when cornered by people who may be hunting them, and on rare occasions have killed people.

The New Testament mentions wolves in five places, the Greek word used being lukos, meaning “a wolf”. Let us look at each of these five instances where wolf or wolves is used.

Matthew 7:15. “Beware of false prophets, which come to you in sheep’s clothing, but inwardly they are ravening wolves.” Let us read the full context.

“Therefore, whatever you want men to do to you, do also to them, for this is the Law and the Prophets. Enter by the narrow gate; for wide is the gate and broad is the way that leads to destruction, and there are many who go in by it. Because narrow is the gate and difficult is the way which leads to life, and there are few who find it. Beware of false prophets, who come to you in sheep’s clothing, but inwardly they are ravenous wolves. You will know them by their fruits. Do men gather grapes from thorn bushes or figs from thistles? Even so, every good tree bears good fruit, but a bad tree bears bad fruit. A good tree cannot bear bad fruit, nor can a bad tree bear good fruit. Every tree that does not bear good fruit is cut down and thrown into the fire. Therefore by their fruits you will know them. Not everyone who says to Me ‘Lord, Lord’ shall enter the kingdom of heaven, but he who does the will of My Father in heaven.”

Notice that wolves here are identified as being camouflaged to appear as sheep. They are known by their fruits, or the works that they do, whether they are lawful, loving, kind, gentle, and humble, works of the spirit of God dwelling in them (Galatians 5:22-23), or whether they exude works of the flesh, such as jealousy, hatred, reveling, anger, impatience, and any number of other negative attitudes (Galatians 5:19-21). “Therefore by their fruits you will know them” (v. 20), or, as Paul states in Ephesians 2:10, “For we are His workmanship, created in Christ Jesus for good works, which God prepared beforehand that we should walk in them.”

A wolf is going to encourage the exercise of the lusts of the flesh, or anything that drives the elect away from obedience to the Father. He is going to attempt to disrupt brethren from obedience to His word, from lawful living and good works, which the sheep will be following as they obey the Shepherd of the sheepfold, the one Jesus Christ who paid the price for their sins and called them out of Babylon to be shining lights of His new creation, ambassadors of a nation which has not yet sent its roots into the world’s order.

Matthew 10:16. “Behold, I send you out as sheep in the midst of wolves. Therefore be wise as serpents and harmless as doves.”

This section of scripture reveals Christ’s command to the twelve apostles to “go to the lost sheep of the house of Israel and preach that the kingdom of God is at hand, and to heal the sick, cleanse the lepers, raise the dead, and cast out demons (Matthew 10:5-8). The “wolves” Christ was referring to were the men who would “… deliver you up to councils and scourge you in the synagogues. You will be brought before governors and kings for My sake, as a testimony to them and to the Gentiles” (Matthew 10:17-18). These wolves were people who opposed the message of our Savior and the good deeds of healing, preaching, and casting out demons, similar to the meaning of wolves in Matthew 7:15, just discussed.

In this situation the 70 appointed by Christ, and sent by twos into the cities where He would later go, were to carry no provisions with them and find places to stay in those towns they visited, preaching the good news of the Kingdom of God and healing the sick. Their responsibility was similar to that of the twelve disciples mentioned in Matthew 10, and the “wolves” they would meet during their journeys were presumably similar to those the twelve encountered … opponents of the truth who intended to thwart the efforts of the 70. These evil-doers would include those who would not receive them in certain towns, at which point the 70 men were told to say, “The very dust of your city which clings to us we wipe off against you. Nevertheless know this, that the Kingdom of God has come near you” (Luke 10:11).

This mentioning of a wolf is in the parable of the Shepherd and the sheepfold in John 10:7-18. Jesus is the door of the sheep, and if anyone enters the sheepfold by Him “…will be saved, and will go in and out and find pasture” (John 10:9). A thief may try to enter the sheepfold in some way other than the Door, but the sheep [the elect] do not recognize him. Moreover, a hireling [misthotos, “a person who is hired to do a job, not the owner”] does not have the care for sheep like the owner does, and when a bear or wolf approaches to devour a sheep, he is likely to run away, rather than risk facing the threat of bodily harm from the vicious and hungry animal.

In John 10:9 the wolf is again shown to be a divisive, banal person caught up in rivalry, jealousy, and selfish gain (Galatians 5:19-21). Like in the afore-mentioned citations, the wolf is pursuing his own greedy lusts and doing Satan’s work of destroying — or attempting to destroy — God’s people, those in the sheepfold who recognize the Savior’s voice, His words of truth.

Acts 20:29. “For I know this, that after my departure savage wolves will come in among you, not sparing the flock.”

In this scripture Paul went on to describe some of these wolves, those who “… will rise up, speaking perverse things, to draw away the disciples after themselves” (Acts 20:30). Here it is clear that these “wolves” would try to infiltrate into the ecclesia in the area of Ephesus. Paul had called the older members of the Ephesian congregation to meet him at Miletus (Acts 20:17). These wolves were of evil intention, bent on upsetting the brethren with perverse things [diastrepho, “to distort, to turn out of the way, cause to make defective”], teaching them concepts and ideas that were contrary to God’s word that would bring them a personal following … and with that, personal financial gain. Whatever the motive, the objective of these wolves was to do the will of Satan by thwarting the proper functioning of the ecclesia of the Living God.

Now that we know who these wolves are —tools of Satan who wish to enrich themselves by gaining power over God’s elect and directing them into a pathway contrary to the truth — then we can consider the value of identifying wolves. We can be sure that Satan hates God’s people, and will do whatever he can to corrupt and misdirect them into his way of thinking, into his society of Babylonian mysteries and deceptions. How, then, can these people be identified amongst God’s people?

l They will set an example of unrighteousness and selfish ambition in their personal lives, though they will try to hide it, but in time such deception and evil will become known. Errors in their teachings would also creep into their prophesying and conversations.

l They may try to change the course of doctrine towards erroneous directions, and find ways to profit themselves financially in the process. This is especially true for corporate organizations where a few individuals at the headquarters office can profit from tithes and offerings, such as Herbert Armstrong did in his later years.

l They will avoid discussing sound doctrine and searching the scriptures, and discourage others from doing so. “Shop talk” will be their main emphasis in conservations.

l They will discourage people from advancing in their knowledge of the truth, and encourage the adoption of the “yellow pencil,” idea wherein everyone is the same, despite God’s making each of His creations unique.

In short, these wolves will in some ways practice the habits noted in II Timothy 3:2-7.

“For men will be lovers of themselves, lovers of money, boasters, proud, blasphemers, disobedient to parents, unthankful, unholy, unloving, unforgiving, slanderers, without self-control, brutal despisers of good, traitors, headstrong, haughty, lovers of pleasure rather than lovers of God, having a form of godliness but denying its power. And from such people turn away! For of this sort are those who creep into households and make captives of gullible women loaded down with sins, led away by various lusts, always learning and never able to come to the knowledge of the truth.”

How do we avoid wolves in sheep’s clothing among the ecclesia? Here are some guidelines.

l Teach and follow pure religion, undefiled, by visiting widows and orphans in thir affliction, and keep oneself unspotted by the world (James 1:27).

l Do good to all men, especially to those in the ecclesia (Galatians 6:9-10).

l Feed the hungry, give drink to the thirsty, clothe the naked, visit the prisoners, and take in strangers (Matthew 25:31-46).

l Follow the lead of the spirit of God that has been placed within you (Galatians 5:22-23).

l Contend earnestly for the faith that was once delivered for all to the saints (Jude 3).

l Avoid incorporating groups of the ecclesia, for these organizations by definition require State approval and contain a hierarchy of men. The true church throughout history has never asked Caesar for approval to exist.

l Avoid having a paid leader; the love of money can warp judgment in a number of ways, for the love of money is the root of all evil (I Timothy 6:10). A paid leader will be required to toe the line of the leadership within the corporate structure, and should be considered a hireling.