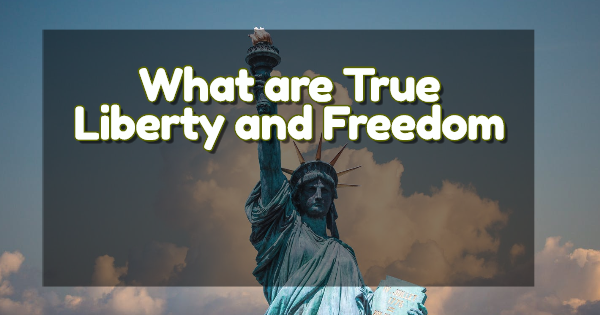 What Are True Liberty and Freedom?

So much has been said about the need to be free, to be liberated from the shackles that have bound us as slaves to some person, group, or doctrine. The National Organization of Women (NOW) touts liberation from the domination of man, animal rights activists cry out against the slaughtering of animals for pelts or food, and Marxist politicians decry the merciless oppression of the working class by the burgoise. Throughout history we have seen the oppression of one person or group by another person or group, most notably in civil governments but also in religious movements (Catholics unleashing the Inquisition on Protestants), in social arrangements (the Caste System of India0, and in other areas of life. For a small sampling,

Recent history. Nazi Germany conspired to stifle freedom, and killed millions in Europe during the 1930’s and 1940’s. The Tutsis and Hutus killed hundreds of thousands of one another in Rowanda. Pol Pot and his army murdered perhaps 3 million Cambodians.

In terms of religion, the Roman Catholic Church exterminated multiple millions of Christians from about 1500 to 1750. If one did not agree with the Pope and his henchmen on issues of faith, you were likely to be tortured on the rack, cast into a dungeon, or burned at the stake. Governments of all nations tax citizens, stealing their income through force of arms and threats of prison if necessary, and use that wealth for themselves and for personal projects such as wars, abortions, welfare, public education, socialized medicine, retirement benefits, and redistribution of wealth within and among nations.

Governments of men promise liberty and freedom so they can gain followers and control them. Few citizens of the United States realize that the beloved Statue of Liberty is a well-recognized masonic icon that traces its roots back to the ancient Babylonian goddess Ishtar, also identified with the goddesses Liberatas, Juno, Venus, and Isis. The Babylonian Ishtar was Imperial Rome’s goddess Libertas and Papal Rome’s “Mother of Harlots and Abominations of the Earth”; it is the template for America’s Statue of Liberty. This colossus in New York’s harbor was conceived by Freemasons, financed by Freemasons, built by Freemasons, and installed by Freemasons in a Freemasonic ceremony. The poem about “the huddled masses” inscribed on its base was written by the American Jewess Emma Lazarus in 1883.

This, in a sense, a major symbol of our own land invites all people to engage in the free-wheeling “liberty” of the fertility goddess to indulge in whatever pleases the senses … which is indeed what our culture has come to embrace more and more. The words of the apostle Paul ring as true today as they did nearly 2,000 years ago,

“Know you not that to whom you yield yourselves servants to obey, his servants you are to whom you obey, whether of sin unto death or of obedience unto righteousness” (Romans 6:16)?

There is a continuum between the extremes of liberty and total slavery and oppression. Oppression may be defined as the imposition of control over another person or group of people by ordering their lives and destiny, men ruling over men.

Did God intend that men should rule over men? No! Mankind was created in the very image and likeness of the Creator (Genesis 1:26-27), to be servants of others and live in the manner that He does in heaven (Matthew 25:34-40), with a destiny to become spirit kings and priests like Jesus Christ (Revelation 5:10; Romans 8:29).

The battle for true liberty and bondage is therefore between God’s ways or Satan’s ways ruling within our lives. It is the age-old battle of right versus wrong, of good versus evil. God created mankind in His image with the understanding that these creations were made to live by His laws. Only then can pure, unadulterated liberty be achieved, just as Yahweh predicted in the Old testament.

Deuteronomy 6:1:3. “Now this is the commandment, and these are the statutes and judgments which the Lord your God has commanded to teach you, that you may observe them in the land which you are crossing over to possess, that you may fear the Lord your God, to keep all His statutes and His commandments which I command you, you and your son and your grandson, all the days of your life, and that your days may be prolonged. Therefore hear, O Israel, and be careful to observe it, that it may be well with you, and that you may multiply greatly as the Lord God of your fathers has promised you – a land flowing with milk and honey.” (See also Deuteronomy 4:40; 6:17-18; 12:28).

Liberty and freedom in our Creator are described by three major words in the New Testament:

Noun form: eleutheria (1657). “Liberty.” This word comes from the adjective form below (1658), and in Galatians 5:13, “The phraseology is that of manumission [formal release from slavery or servitude] from slavery, which among the Greeks was effected by a legal fiction, according to which the manumitted slave was purchased by a god; as a slave could not provide the money, the master paid it into the temple treasury in the presence of the slave, a document being drawn up containing the words ‘for freedom’. No one could enslave him again, as he was the property of the god. Hence the word apeleutheros, a ‘freed man’.”

Adjective form: eleutheros (1658). “Freedom to go wherever one likes.”

All the uses of the word liberty below are derived from eleutheria (1657), the noun form of this word.

Romans 8:20-21. “For the creation was subjected to futility, not willingly, but because of Him who subjected it in hope; because the creation itself also will be delivered from the bondage of corruption into the glorious liberty of the children of God.”

Galatians 2:3-5. “Yet not even Titus who with me, being a Greek, was compelled to be circumcised. And this occurred because of false brethren secretly brought in (who came in by stealth to spy out our liberty which we have in Christ Jesus, that they might bring us into bondage), to whom we did not yield submission even for an hour, that the truth of the gospel might continue with you.”

Galatians 5:1-2. “Stand fast therefore in the liberty by which Christ has made us free, and do not be entangled again with a yoke of bondage; indeed I, Paul, say to you that if you become circumcised, Christ willl profit you nothing.”

Galatians 5:13-14. “For you , brethren, have been called to liberty; only do not use liberty as an opportunity for the flesh, but through love serve one another, for all the law is fulfilled in one word, even in this: you shall love your neighbor as yourself.”

James 1:24-25. “… for he observes himself, goes away, and immediately forgets what kind of man he was. But he who looks into the perfect law of liberty and continues in it , and is not a forgetful hearer but a doer of the work, this one will be blessed in what he does.”

James 2:10-13. “For whoever shall keep the whole law, and yet stumble in one point, he is guilty of all. For He who said, Do not commit adultery, also said, Do not murder. Now if you do not commit adultery, but you do murder, you have become a transgressor of the law. So speak and so do as those who will be judged by the law of liberty. For judgment is without mercy to the one who has shown no mercy. Mercy triumphs over judgment.”

I Peter 2:15-16. “For this is the will of God, that by doing good you may put to silence the ignorance of foolish men — as free, yet not using liberty as a cloak for vice, but as bondservants of God.”

II Peter 2:18-19. “For when they speak great swelling words of emptiness, they allure through the lusts of the flesh, through lewdness, the ones who have actually escaped from those who live in error. While they promise them liberty, they themselves are slaves of corruption; for by whom a person is overcome, by him also he is brought into bondage.”

John 8:31-36. “Then Jesus said to those Jews who believed Him, If you abide in My word, you are My disciples indeed. And you shall know the truth, and the truth shall make you free. They answered Him, We are Abraham’s descendants, and have never been in bondage to anyone. How can You say, You will be made free? Jesus answered them, Most assuredly, I say to you, whoever commits sin is a slave of sin. And a slave does not abide in the house forever, but a son abides forever. Therefore if the Son makes you free, you shall be free indeed.”

Galatians 5:1. “Stand fast therefore in the liberty by which Christ has made us free, and do not be entangled again with a yoke of bondage.”

The “yoke of bondage” here is clearly the breaking of God’s commandments, whereby one submits himself to the slavery of Satan. To maintain true liberty, there is no allowance for a return to the licentious lifestyle of those following the ways of Ishtar, the goddess of sensuality.

What is the conclusion of the matter? What are true liberty, and how can we attain this quality? True liberty in the eyes of God is following the commands of our heavenly Father and Jesus Christ, not just in the letter of the law but in the spirit of it, loving one’s neighbor as oneself. This manner of living Christ referred to as follows:

“Therefore all things whatsoever you would that men should do to you, do you even so to them, for this is the law and the prophets” (Matthew 7:12).

Sin, of course, is the breaking of God’s immutable spiritual laws (I John 3:4). The moment we sin we immediately consent to our own set of laws, those of the Adversary, and we lose the freedom inherent within a pure life. We yield ourselves to the pathway leading to death.

Romans 6:16. “Do you not know that to whom you present yourselves slaves to obey, you are that one’s slaves whom you obey, whether of sin leading to death, or of obedience leading to righteousness?”

Mankind was made to be a vessel of righteousness. The moment we step outside of those parameters written upon the tablets of our hearts through His spirit, we have forsaken the codes of our design. We then have become like the lump of clay that replies against its Maker, “Why have you made me thus?” (Romans 9:20).

True liberty and freedom are possible only within the context of a life dedicated in service to the Creator — of the Creator Himself molding the clay — visiting the orphans, the fatherless, and widows in their affliction, doing good to all men and especially the household of faith, visiting the sick and those in prison, feeding the hungry, clothing the naked, and keeping oneself unspotted from the world. We must be as Paul when he saw the wretchedness of his own sin-loving flesh:

“O wretched man that I am! Who shall deliver me from the body of this death? I thank God through Jesus Christ our Lord! So then, with the mind I myself serve the law of God, but with the flesh the law of sin” (Romans 7:24-25).