Near a Tipping Point 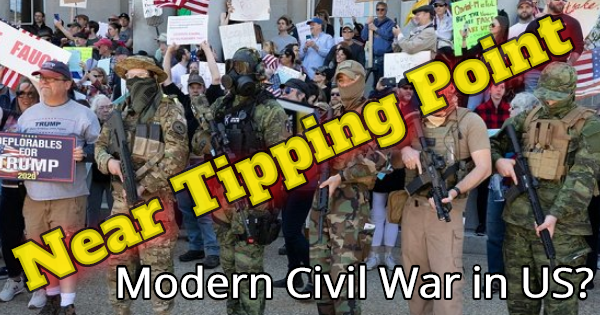 Editor’s Notes: Here is a post by Bob Rinear that deserves attention.

Yes, 1.8 million. That’s how many guns were sold in just, the month of August.  As you might imagine that’s a record. But then almost every month this year has been a record. January and February were slightly above average, but from March on, it’s been madness.

One side of me is grinning ear to ear because I’m a 2nd amendment sorta guy and seeing so many people buying weapons makes me happy. But there’s another side of me that “knows” that a lot of the people buying these weapons have NO idea what they’re doing. The only training they’re going to get is watching bad TV shows, and that’s no good for anyone.

The other thing that’s disturbing of course is that some of these sales are NOT coming from good honest people that are a bit frightened of seeing the anarchy on the streets of our big cities. Some of these guns are being sold to people that want to create that anarchy. That too is not very good.

We are on the path to a shooting civil war. It is my belief that the next 6 months is going to be the prelude to a societal collapse. Now I realize that those are strong words and some will look at it as blather from a conspiracy nut. But take some time to ponder it, and it isn’t so crazy.

First off, the election. You might know by now that Axios ( who got the 2016 election right) has said that on election day, it will look like Trump won by a landslide. But then they say as the mail-in votes come in, Biden will end up with the win.

That in a nutshell is going to rip this country in two. Anyone that’s honest, knows for a FACT that mail-in voting is fraught with fraud. In some areas, there were more votes than voters that lived there. Dead people. Pets. So, if it plays out like that, do you think Trump is going to bow out? Or is he going to fight tooth and nails in the courts? You know the answer. And the left will go crazy.

But likewise, let’s suppose that so many people have been disgusted by what the Democrats have done with AOC and Pelosi’s double standards, etc that Trump does win it all. Do you think the Antifa idiots and the BLM people are going to accept that? Hell no. There’s going to be even more rioting in the streets.

So we’ve got the left and the right at each other’s throats. Now add in the elitist tyranny. On top of having us divided like no time in the last 150 years, they’re planning their big reset. They want to fundamentally change the world, and they’re using COVID as cover, for their “green earth” new deal jargon.

The World Health Organization has already stated that things will NEVER go back to normal, even if COVID is erased. Why? Because they say we need structural change, beginning with climate change! I kid you not. Oh, and to help it all,- along, the WHO, along with the UN have launched “law lab” for sharing how everyone is governed.

Launching today, the COVID-19 Law Lab initiative gathers and shares legal documents from over 190 countries across the world to help states establish and implement strong legal frameworks to manage the pandemic. The goal is to ensure that laws protect the health and wellbeing of individuals and communities and that they adhere to international human rights standards.

We’re on the precipice of going down in flames (literally).   As was warned of so many years ago, no standing army or armies could take down America, it could only be taken down from within. The enemy is inside the gates folks, and all hell is about to break loose. I wish it weren’t so, and I hope I’m full of hot air, and stupid thoughts. But let’s see where we really are in 2 years, and see if indeed I’m nuts, or we’re knee-deep in troubles.  1.8 million guns in ONE month continues to come to mind.  Continue to pray.